We are still waiting for the password to open the file that contain the content of Part 5 relating to the young woman at the center of the underage prostitution scandal in Singapore. It was revealed in Part 3 and Part 4 of the presentation and other emails from the source that her name is Steph Thia Hwee Koon a.k.a. Chantelle (social escort name) a.k.a. Steph Thia Hui Jun. And that she now 19 year-old and she is an ITE student and part-time model from Choa Chu Kang. We have tried using several programs to crack the password for this file but without success. The password for the file containing Part 4 of the presentation is “12345678” so the password for Part 5 should be something simple. And yes, we have tried the password “12345678” for part 5 and also “abcdefgh” so relax.

Anyway, the Gutter Uncensored has received more photos from other sources of Steph Thia Hwee Koon a.k.a. Chantelle (social escort name) a.k.a. Steph Thia Hui Jun and more info on her so with that we might have another interesting post if we get the password for part 5 of the presentation to add to it. Please send more photos of Chantelle to GutterUncensored(at)yahoo.com as soon as possible. Your identity will kept a secret and you will remain anonymous by the GutterUncensored.com website. This story is huge because this young woman took down a police officer, a civil activist from a prominent family, an UBS bankers, lawyers, the vice-president of a private company, a school principal, teachers, social elites and several top civil servants in Singapore. Even Yahoo News was interested in and buzzing about the identity of before her name was revealed on GutterUncensored.com last week:

Just who is this underage callgirl involved in a widening high-profile sex scandal that has embarrassed 48 men and counting?

To date, 48 have been charged for allegedly having paid sex with the girl, who worked for a now defunct online prostitution website.

The girl is believed to be 17 – below the legal age for prostitution — when the alleged offenses took place between September 2010 and February 2011.

And yes, the news media in Singapore is also buzzing about the scandal the underage escort/callgirl and the many men too:

The “identity of mystery Singapore callgirl” is mystery no more because here she is: 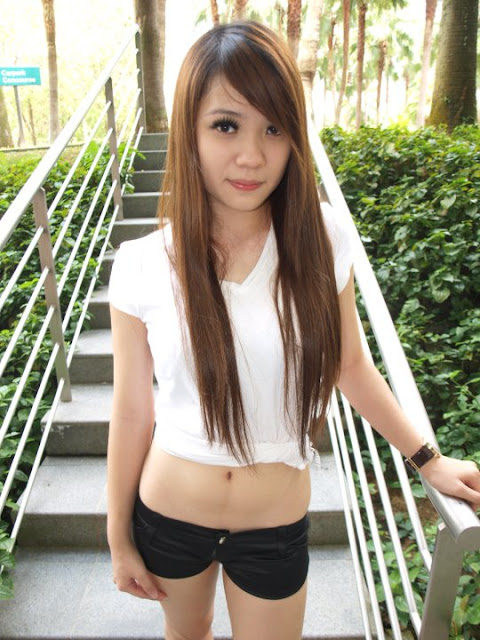 Steph a.k.a. Chantelle, the 19 year-old young woman at the center of the Singaporean underage prostitution scandal.

And by the way, while the source of the presentation might or might not be upset at the young woman who seemingly lied about her age to work as a social escort and/or upset at the justice system in Singapore so he or she might or might not be seeking revenge for the men publicly named in the underage Singaporean prostitution scandal while the the identity of the adult woman testifying against them is more protected. The Gutter Uncensored has no dog in this fight… This website is just providing information for the people who like watching dog fights (figuratively) and from the stats the Singaporeans too who are very interested in watching this big dog fight in their backyard. As the source calls it “THE TSUNAMI IN TOWN” that is the biggest scandal in Singapore in years. And this website is just helping the public learn everything since the local newspapers and the nightly news reports on TV are barred by law from reporting the juices bits. This website is not located in Singapore so those local laws (respectfully) restricting information don not apply here. And the fact is the young woman testifying and/or bring the charges in court is simply not a minor anymore, she is 19 year-old.